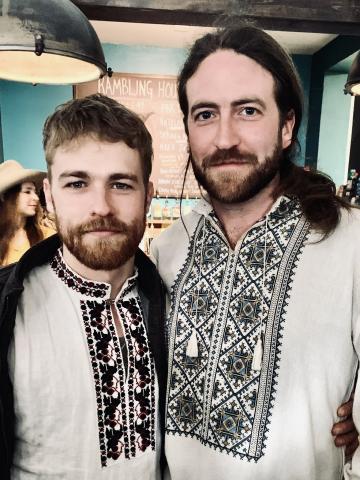 When we planned this concert and were advertising it, this was intended to be an in-person performance. However, the two members of the band who were going to play for you, Benya Stewart and Brother Hill, are currently in Ukraine. They have been delivering directly to people of Ukraine the life-saving medical supplies they were able to purchase with these funds. And they had intended to be back two days ago so that they would be able to play for you all in person.

However, while there they were invited to play a short series of support shows in Eastern Ukraine for refugees of all ages and soldiers as a part of a documentary that has some extraordinary potential for fundraising for more medical kits, armored ambulances and refugee resettlement. They have therefore decided to extend their time in Ukraine an extra week. They wish to express their regret to you, but make known that both their consciences feel compelled by this opportunity to be a part of the war effort.

In lieu of being able to play in-person, they have recorded the concert that we will stream in the Large Meeting Room.

A Presentation from the Appalachian/Slavic Folk Alliance Weaving Solidarity through Music.

Join Benya Stewart and Brother Hill for an afternoon of music and stories regarding their recent mission in Eastern Europe. Among other topics, they will share how they found themselves delivering life-saving medical supplies and performing along the way, who made the trip possible, and how Ohioans can continue to help the people of Ukraine.

Stewart and Hill are founding members of Slavalachia, an international performing arts group blending and celebrating the folk traditions of Ukraine, Belarus, and Appalachia since 2019. Other band members are Ukrainians, living and volunteering in Western Ukraine, and a Belarusian, now based in Minneapolis.

The group’s first single "Which Side Are You On?" is an adaptation of a Kentucky miner’s song, released as an anthem of resistance in 2020 as Belarusians protested a staged and false election. In 2021, the group’s first album was compiled and recorded in Ukraine. Their newest album, released in April 2022, is a condemnation of imperialism and oppression, the likes of which Slavs and Appalachians have both endured.

This concert is part of a larger tour across Ohio that has so far raised over $40,000 for relief in Ukraine. While the program is free and open to the public, optional donations are welcome.

Read more about Slavalachia, their recent fundraising and tours, and their debut album at

Sponsored by the Friends of the Athens Public Library.