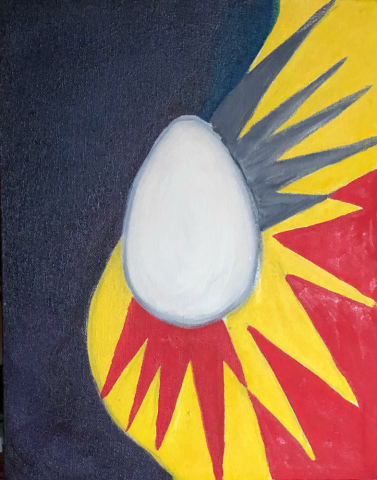 On exhibit on the Circulation Area Wall from Tuesday, January 4th thru Saturday, January 29th.

"In my work I attempt to visually capture the liminal state where the objective, natural world meets and interacts with the subjective, internal world of the imagination. At this stage, my work reflects my beginnings in communicating my journey into a sense of otherness. In my works "Strange Angles" (in eight parts) and "Strange Angles 2" (in two parts), I was influenced by a short story written by Frank Belknap Long, "The Hounds of Tindalos" (1929), where angles are presented as doorways into a different state of being, contrasted with our natural world. It was from there that my work, "Catalpa Man" (triptych) evolved, with the third panel showing that these beings can reach self-enlightenment. Contrasted with this, is an older work, "(Self)-Creation" that shows where nature has influenced my imagination as much as early 20th century horror fiction. It is not that horror – whether from fiction or personal experience (see my painting, "Life Interrupted: Tragedy") – has created the world I live in, but its influence can be seen, and hopefully felt, in my work. It is my hope that these paintings can express a story in how I experience the world around me." -- Judith Winner, Domestic Abuse Survivor, Breast Cancer Survivor, Survivor, Warrior, Me